By the end of the decade, more apps, shared services, and electrification will significantly expand mobility’s scope and modes 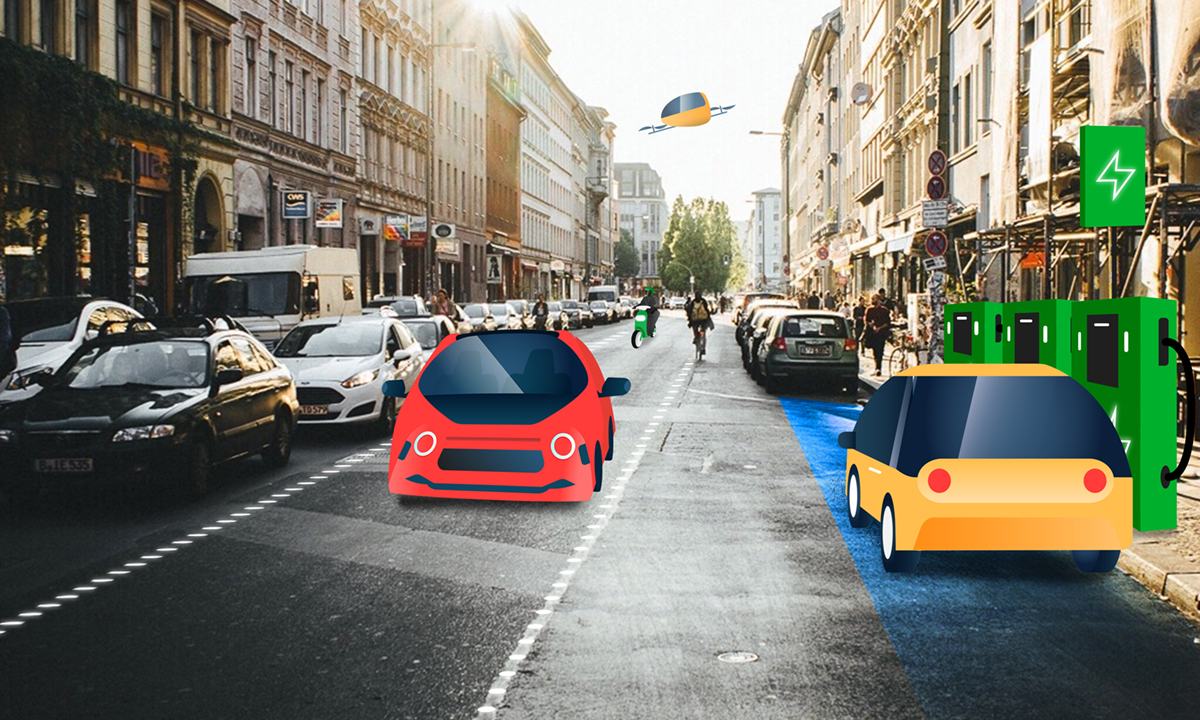 A wave of shared and digital services is transforming mobility with options that go beyond traditional public transport and privately owned cars. Applications have accelerated the deployment of new modes and services, reshaping urban and suburban travel. These new services are expected to grow over the next decade about twice as fast as traditional mobility, with potential benefits for climate, pollution, and the livability of cities.

To gauge the impact, the Oliver Wyman Forum and the Institute of Transportation Studies (ITS) at the University of California, Berkeley analyzed 13 services in three regions: North America, Europe, and Asia. In addition to mobility services, the study covered complementary services such as electric‑vehicle (EV) charging stations and smart parking solutions. The study projected an average growth of almost 10% a year over the current decade through 2030, compared with 5% for the overall mobility sector. The new services are expected to generate annual revenue of $660 billion in 2030, up from $260 billion in 2020.

The industry is expected to be more sustainable with the increased electrification of mobility services. By adopting EVs at a faster rate than private car owners, new mobility services could improve air quality, reduce noise levels, and shrink the carbon footprints of cities — providing renewable or low‑carbon energy used for the generation of the additional electricity needed.

Whether new mobility services will reduce congestion over time is more up for debate. On one hand, people moving to bicycles and scooters could reduce the number of cars in a city, but ride‑hailing and car sharing may contribute to congestion if in fact commuters choose these services over mass transit.

Subways, buses, and commuter light rail are by far the most efficient and environmentally friendly mode for moving people around cities based on the number of passengers alone transported with each trip. At points, the COVID‑19 pandemic caused the use of public transport to plummet as much as 95% in certain cities, an Oliver Wyman Forum survey found, with many of those riders choosing shared bicycles, scooters, and car services to avoid crowds. While many of those riders have returned to public transportation as COVID fears have subsided, the systems have been weakened by the loss of revenue. Any long‑term shift from mass transit to ride‑hailing could not only deprive systems of needed financial and public support but also lead to congestion — a trend already observed in several cities.

Emissions also could rise if these new services rely on internal combustion engines (ICE). Cities will need to find a balance between encouraging new solutions and bolstering mass transit systems. This can be accomplished through consistent investment in mass transit infrastructure, maintenance of affordable fares, and the creation of sustainable and intermodal ecosystems that connect new services with mass transit as much as possible.

The study examined three regions — North America, Europe, and Asia — and found that the new services would evolve at different speeds, depending on the location. European cities are densely populated, which facilitates the deployment of micromobility services. The European region is also expected to see the strongest expansion in the numbers of EVs and charging services, as the region overtakes Asia to become the fastest‑growing region in electric mobility in the next years.

In North America, where smart parking payment services are expected to grow fastest, commuters have long relied on cars. This is primarily because of the significant worker population living in North American suburbs; the relatively inconsistent support of mass transit outside of certain cities, especially in the US; and the urban sprawl of many of the region’s large cities.

On the other hand, many parts of Asia have long traditions of bike or moped use, making them more open to shared services and micromobility. Super apps have proliferated in the region, combining services for communication, transportation, and commerce into a single platform. Thanks to the super apps and the success of local players, these mobility services are expected to continue to expand. The Asian market, with its large population and dense cities, is about the same size as the markets in Europe and North America combined. It will remain larger through 2030. Asian revenue from mobility services is forecast to reach $337 billion by that year. North American revenue will hit about $175 billion and European, $144 billion.

Some of the strongest growth will come from semi‑mature and emerging services, which are expected to grow at an average of 23% a year, four times faster than the overall mobility market. These include the following:

The global market for charging services should rise about 35% a year to reach $12 billion by 2030, simultaneously encouraging and reflecting a significant expansion in the sales of EVs. The highest growth is expected in Europe because of significant government support of electrification through EV incentives and mandates against the sale of new gasoline or diesel‑powered cars. Reflecting the mounting public alarm over climate destruction, these have been passed by nations and several European cities, some beginning as early as 2025.

The European Union as a whole has also proposed a 55% carbon‑dioxide emissions cut from cars by 2030 and a ban on fossil fuel cars by 2035.

The overall bike sharing market is expected to grow 10% per annum and reach $15 billion by 2030. Bikes have long been popular in China, where cycling is booming again after a short pause caused by the COVID pandemic lockdowns in 2020. Asia accounts for 90% of the global market, and it is expected to have the highest regional growth.

The overall market is expected to grow at an annual 23% to reach $7 billion in 2030. In Europe, electric scooters are considered an environmentally friendly form of individual mobility. Scooters also are growing in popularity in some big North American cities: The US was the first country to introduce dockless models, which soon overtook shared bikes.

The global carpooling market is expected to reach $21 billion by 2030, after growing at an annual 14%. It’s led by North America where services were early to digitize and are driven by the high frequency and loyalty of daily commuters. Some municipalities, especially in Canada, provide special parking lots, discounts on personal car insurance, and high‑occupancy vehicle lanes.

The overall market is expected to expand at an annual 34% to reach $32 billion in 2030, led by growth in North America, which is expected to surpass Europe in 2025. The US is one of the world’s largest parking markets, but it is highly fragmented among many players, its digital potential remains untapped. Given the room for growth, the market is expected to become a target for consolidation through mergers and acquisitions.

Technology, especially in the form of smartphones and connected devices, is facilitating services for ride‑hailing, shared cars, and micromobility, accessed through apps and managed by integrated reservation and payment systems. The integration of platforms for different modes will make mobility services easier to navigate, resulting in greater usage and potentially lower costs. Separately, the development of compact batteries is increasing the range for electric scooters, mopeds, and bike sharing. The promotion of electrically powered mobility will lead tomore sustainable transportation, providing the source of energy is clean.

Regulation plays a major role, as governments and local authorities encourage services through taxes (on carbon dioxide emissions), subsidies (for some new operators), and infrastructure spending. But cities often take the lead in environmental measures, such as restrictions on older, dirtier vehicles, which are progressing to outright bans on all gasoline and diesel engines. The role of cities increased with the COVID‑19 pandemic, as many incentivized specific services, especially in micromobility. Local authorities will have to decide how much to fund mass transit and whether to allocate space to car parking or bike lanes. At all levels of government, technological progress will often outpace regulation, so regulators will need to become more agile to unleash the full potential of mobility innovations. This is one reason that many cities have adopted public‑private partnerships as a means of collaboration.

Consumers’ mobility demands are evolving in seemingly contradictory ways that make them open to digital and on‑demand services. On the one hand, people want inexpensive mobility: Financial uncertainty is leading some to avoid buying a car, and 54% of respondents told the Oliver Wyman Forum Global Consumer Sentiment (GCS) Survey that affordability was a factor in their selection of a mode of transportation (The GCS surveys more than 9,000 consumers in 10 countries quarterly). But the pandemic accelerated a shift away from mass transit, which is the cheapest service available. Instead, many consumers are opting for individual mobility and active modes such as cycling: 90% of GCS respondents expect to use a personal car or walk at least once monthly in the next six months, while just 35% expect to use public transit. Consumers also want agile, on‑demand, and affordable transportation, which creates challenges that are difficult to reconcile. New mobility players will struggle to make a profit as they try to fulfill these consumer demands.