To most people, stock market activity seems random and at times arbitrary. Jacques Cesar believes he has cracked the code. 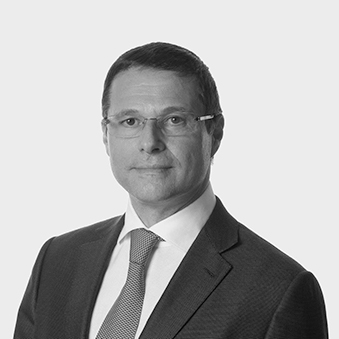 The former managing partner of Oliver Wyman has spent the past several years studying the US equity market’s gyrations over the past century and a half. What he discovered could fill textbooks — and one day might. Just for starters: the specific forces that move the market can be identified and quantified to prepare investors for where equities will head next. The US Treasury bond is anything but risk-free. The much-celebrated Capital Asset Pricing Model, which has become a cornerstone of finance and rained Nobel Prizes down on its creators, is deeply flawed (but fixable with some major computational modifications). If graduate-level finance isn’t your thing, he can also show you how to understand the past 150 years of stock market behavior using nothing more complicated than the concepts of supply and demand.

Cesar’s findings have major implications not only for big institutional investors and money managers, but also for market regulators, economists, and academics. He is publishing his research in five white papers being released now and over the next several months. Cesar spoke recently with the Oliver Wyman Forum about his most important observations.

Oliver Wyman Forum: You’ve spent your 35-year consulting career focused first on the oil sector and then retail and consumer goods. Why did you decide to immerse yourself in the stock market?

Jacques Cesar: The work I’ve done throughout my career as a consultant led me to this point. When I was involved in the oil market, I was steeped in the boundaries imposed by the forces of supply and demand. Later, in retail and consumer goods, my work was at the intersection of mass consumer behavior and deep analytics. I co-founded Oliver Wyman’s Big Data practice. All of these concepts and tools lend themselves to the stock market, which at its heart is driven by the intersection of the behavior of crowds and the realities of supply and demand. I simply moved from studying oil supply and demand balances and mass consumer behavior to financial assets’ supply and demand balances and mass investor behavior.

OWF: One of your achievements is a new tool you call the Holistic Market Model. Lots of strategists have their own models for the S&P. What’s unique about your model?

JC: Our approach was very different. We spent several years looking at the S&P 500 since 1871. We also went way beyond finance, bringing in elements of accounting, analytics, economics, history, and sociology. What we ended up with was something that explains the market’s ups and downs better than anything before.

The Holistic Market Model is unique because it answers two fundamental questions to a much higher standard: Which forces, and in what combination, have driven the stock market over the past 150 years? And how will changes to those forces determine where the market goes next?

OWF: Are you saying your model can predict the future?

JC: No one can consistently predict the future, of course. But the real strength of the Holistic Market Model is that it allows users to calculate how changes in inflation, taxation, income inequality, market psychology, and other forces affect market performance. If you know where those forces are going, the HMM does the rest. For instance, it isn’t clear if the bout of inflation we’re currently experiencing is transitory or permanent, and cogent arguments can be made on both sides of the debate. The HMM doesn’t answer whether inflation will be transitory or permanent, but it quantifies what different rates of inflation would do to the S&P 500.

OWF: Who is your research aimed at?

JC: The work is very far-reaching, so different groups will be interested in different parts of it. For instance, investors and money managers will focus on how these findings can help them position their portfolios for the future. Treasury and Federal Reserve officials will be most interested in the link between taxes and monetary policy and the stock market. The academic community will be most interested in the reengineering of the capital asset pricing model, which used to be the standard, into the much broader Holistic Market Model.

OWF: Your work has led to nine key findings in all. Which, in your opinion, are the most significant, and why?

JC: The replacement of the Capital Asset Pricing Model (CAPM) with the Holistic Market Model is a huge deal for two reasons. One, it re-engineers the CAPM so that it works. Two, it dramatically broadens its scope because it starts with the overall supply and demand balance for financial assets, as any oil executive would do with energy assets. This yin and yang of advanced finance concepts and the supply/demand balance dynamics taught by 19th century economists is the foundation of the Holistic Market Model.

The first eight findings are steppingstones to the most important, the ninth, which shows how the HMM can be used to actively frame future uncertainty rather than blithely wait for some magical reversion to the mean.

OWF: Before COVID hit, there was growing anxiety that the US stock market was becoming increasingly overvalued. What did your research find?

JC: We found that this wasn’t the case. Equities were high then and are high now because the market drivers have pushed them up. Over the past few years, all systems have been go for equities, with the exception of a brief interruption for COVID. Imagine the market is a puppet that’s controlled by five or six strings. Everyone is fixated on inflation right now, but think about the other strings. Real interest rates are low, corporate profit margins are near a 100-year high, income inequality is high, and so on. If those things turn, the market will turn with them. We can’t predict how future elections will play out, but one of our key findings is that the ballot box will largely determine where the equity market will go next.