How one author brought people together around Tolstoy. Plus reading recommendations from friends of the Forum. 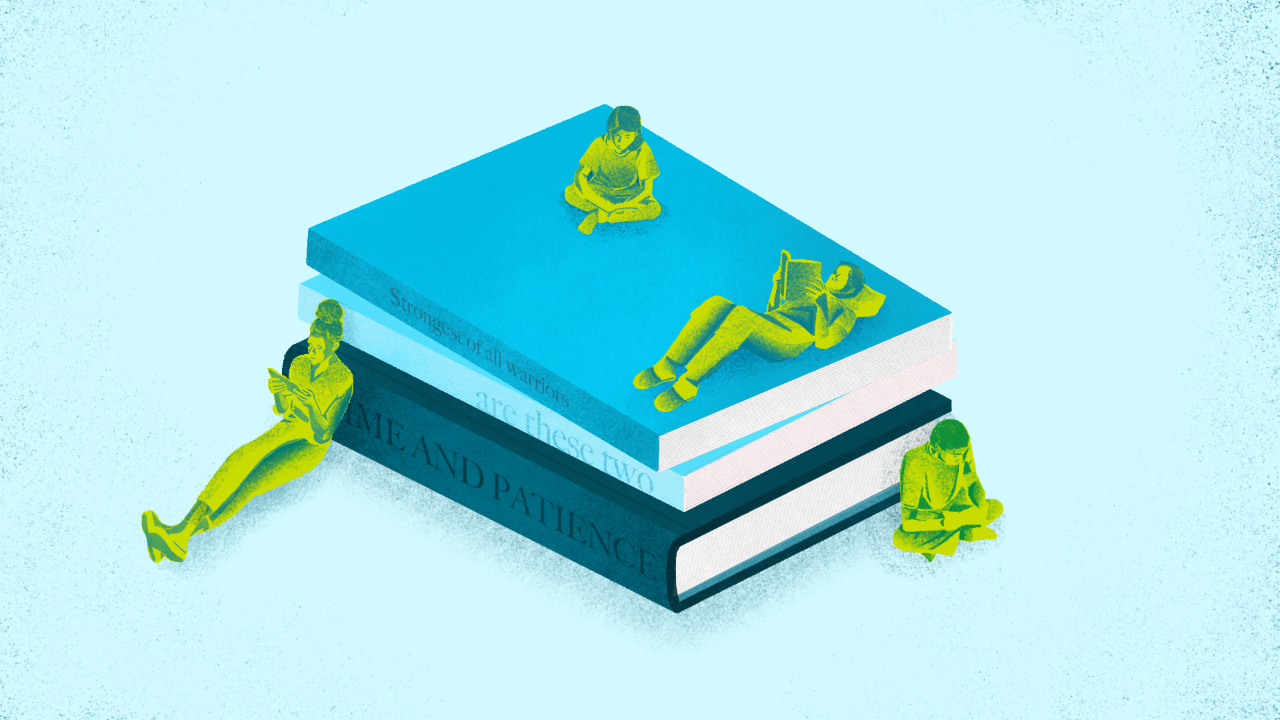 We launched the Oliver Wyman Forum two years ago after recognizing that the only way to solve the world’s greatest challenges — be they climate change, cybersecurity, mobility, or leadership — was to build broad communities of its best thinkers and creators.  The pandemic has reminded us of the power of storytelling to transcend boundaries. Below, we share how Yiyun Li, a Princeton fellow, forged bonds with thousands of people around the world by reading Tolstoy. We also relay book recommendations from members of the Oliver Wyman Forum community to help expand your reading options.  Good reading and good thinking. More than ever we need solutions.

When the pandemic last year brought normal life to a halt, Yiyun Li turned to her trusty tool – literature. In a post on the website of nonprofit publisher A Public Space, the author and Princeton University creative writing fellow proposed that people read “War and Peace” with her, virtually.

“I could hear everyone saying, ‘what are we going to do, how are we going to live,’” she recalls. “And I just thought, well, maybe you can just read 'War and Peace.' That doesn't solve anyone's problem, but sometimes you just need one thing in your life to hold onto, even just for that 30 minutes of concentration.”

Li expected a handful of responses. Instead, some 3,000 people from across the globe accepted the challenge. Language was no barrier as people read in their native Korean, Italian, Norwegian, and other tongues. It provided an opportunity for older parents and their grown children, separated by the pandemic, to connect online. Li’s favorite anecdote was from a man who couldn’t find a copy of the book until a friend with whom he had fallen out two decades before dropped one on his porch.

Tolstoy Together, as the project was dubbed, is one of the uplifting stories to emerge from the pandemic. Li’s initiative showed how the enduring power of storytelling can provide hope and comfort, bridge barriers of class and culture, and forge communities where none had existed before.

“I've always been a solitary person, so solitude is never a problem for me,” Li says, “but I was surprised how joyful the communal part of the project was — for me and for others.”

Li is in many ways a perfect bridge builder. Born in 1970s Maoist China, Li developed a hunger for reading anything she could get her hands on — even the newspaper used to wrap fish in the market — because so few books were available. She came to the United States in the 1990s to study immunology but fell in love with English and got a master’s degree from the University of Iowa’s Writers’ Workshop. She has published six novels, a memoir, and numerous short stories, many of them intensely personal. That work has garnered two awards from PEN America and a so-called genius grant from the MacArthur Foundation.

She’s not done with Tolstoy yet. In September, Li will publish "Tolstoy Together: 85 Days of War and Peace," a recounting of the experience that combines her notes with fellow readers’ reflections on the book, its historical context, and reading generally. She also will kick off an encore group read of the novel. “Tolstoy already had a mind of the multitudes, and it takes a multitude of minds to read him,” she says. “It’s just a delightful experience.”

Li can keep 10 books going at any given time. Her current list includes:

"The Collected Stories" by Mavis Gallant

"Klara and the Sun" by Kazuo Ishiguro

"Tolstoy: A Biography" by A. N. Wilson

"The Collected Poems" by Wallace Stevens

"A Train of Powder" by Rebecca West

Fast Facts: By the Numbers

Digital book sales in the United Kingdom in 2020. It was a leap of 24% over the previous year, underscoring how far digitization in lockdown crept through every aspect of our lives.

The increase of United States book sales related to social science and discrimination from 2019 to 2020. Perhaps spurred by George Floyd protests, top selling books included “The Sum of Us: What Racism Costs Everyone and How We Can Prospect Together,” by Heather McGhee and “Uncomfortable Conversations with A Black Man,” by Emmanuel Acho.

The percentage of purchases represented by books after the French government gave 18-year-olds 300 euros to spend on cultural items like like books, music, or performance tickets. About two-thirds of those book purchases were manga – comics originating from Japan.

The number of books released in South Korea relating to infectious disease, viruses, and pandemics in 2020. Typically, only about 20 books related to those topics are released per year.

Esther Dyson, a philanthropist and angel investor, is a big fan of “Noise: A Flaw in Human Judgment,” by Daniel Kahneman, Olivier Sibony, and Cass R. Sunstein. Its examination of how noise differs from bias in both human and machine judgment, and how they both negatively affect everything from sentencing to hiring decisions, “changed how I measure so many things,” she says. She also recommends “Good Reasons for Bad Feelings,” psychiatrist Randolph Nesse’s exploration of the evolutionary sources of mental disorders – “it explains so many things about why people are seemingly so irrational” – and Kim Scott’s “Just Work: How to Root Out Bias, Prejudice, and Bullying to Build a Kick-Ass Culture of Inclusivity.” “We – mostly – all know that we should be fair and non-racist, and correct injustices – but how to do so in practice?” she says. “This book will change how I behave.”

Sir John Sawers, the former British diplomat and spymaster, just finished “Hard Choices: What Britain Does Next,” by fellow ex-diplomat Sir Peter Rickets. “It’s a blessedly quick read,” he says, “setting out the tight corner we have put ourselves in by leaving the EU.” Recent fiction favorites include Maggie O’Farrell’s “Hamnet,” which he calls “an incredibly moving imagined account of the early death of Shakespeare’s son,” and Douglas Stuart’s “Shuggie Bain,” a “vivid and at times grueling account of growing up in poverty-stricken Glasgow” that won last year’s Booker Prize.

Helen Clarkson, CEO of the nonprofit Climate Group, is reading Bill Gates’s “How to Avoid a Climate Disaster: The Solutions We Have and the Breakthroughs We Need,” to prepare for an interview with him during next month’s Climate Week NYC. She tends to recommend environmental fiction, including “The Overstory,” Richard Powers’s saga about trees and the activists that unite against a timber company, which won the 2019 Pulitzer Prize, and “The Monkey Wrench Gang,” Edward Abbey’s story about development saboteurs that has inspired eco-activists since 1975. “His writing really made me think about the philosophy of environmentalism,” she says.

David Smith, a sociologist who this summer started a new job as an associate professor at Johns Hopkins University’s Carey Business School, is diving into “Brave New Work: Are You Ready to Reinvent Your Organization,” by Aaron Dignan, who argues that focusing on people rather than bureaucracy creates better organizations. Smith, who last year published “Good Guys: How Men Can be Better Allies for Women in the Workplace,” also recommends “Fair Play: A Game-Changing Solution for When You Have Too Much to Do,” in which Eve Rodsky advises on how to strengthen relationships by rebalancing the unpaid household tasks traditionally done by women.

Frank Pasquale, the Brooklyn Law School professor and AI specialist, likes New York Times journalist Nicole Perlroth’s “This Is How They Tell Me the World Ends: The Cyberweapons Arms Race,” which weaves together compelling narratives with critical questions about US cybersecurity strategy. He also recommends “The Uncontrollability of the World” by German sociologist Hartmut Rosa, who argues that the accelerating pace of innovation causes alienation and makes it harder for us to truly feel alive. “His theory has many implications for technologists,” he says.

David Schwimmer, CEO of the London Stock Exchange Group, is finishing “At Canaan’s Edge: America in the King Years, 1965-68,” the third volume of Taylor Branch’s history of the US civil rights movement. “I thought I knew a lot about US history, but these books have been a real education and have helped provide me with some historical context for the Black Lives Matter movement,” he says.

John Romeo, managing partner and head of the Oliver Wyman Forum, recommends “Last Best Hope: America in Crisis and Renewal.” Journalist and author George Packer’s analysis of America’s decline into tribalism has “some scary warning signs for those of us living in the UK,” he says, but ultimately finds opportunity for national renewal through tackling inequality. He also likes “On the Future: Prospects for Humanity,” in which British astrophysicist Martin Rees argues that a new approach to technology can help us answer “the big picture questions on the future of humanity.”

August 2021
linkedin facebook twitterbird email
Subscribe to our newsletter
How To Win Gen Z Customers
January 2023
January 2023
How To Win Gen Z Customers
Business needs to figure out these passionate, tech-savvy consumers — or risk losing them
Full article
2023: A Time To Experiment
December 2022
December 2022
2023: A Time To Experiment
Businesses already bruised by the pandemic need to prepare for the next round of challenges and opportunities by trying new things and seeing what works
Full article
Monthly insights on today’s most challenging problems for business, public policy, and social enterprise leaders.
Subscribe
More Past Editions
More Past Editions