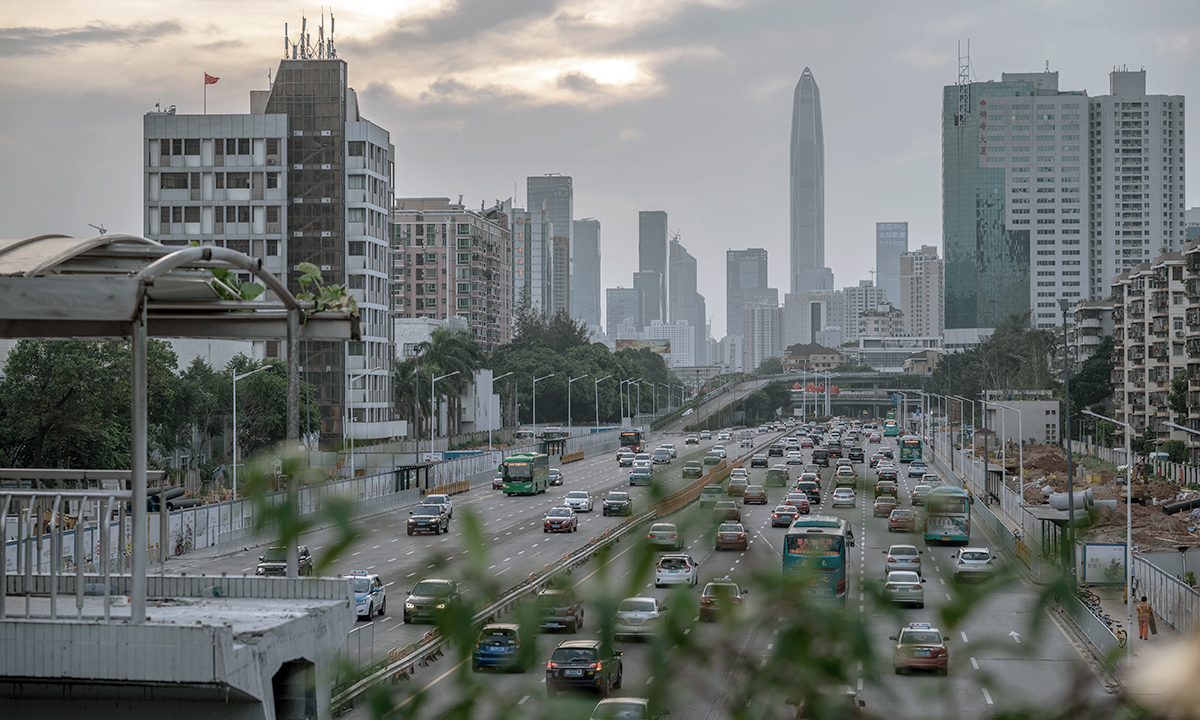 A busy artery feeds traffic into Shenzhen, where the government has converted bus and taxi fleets to electric vehicles.

This article was originally published in Caixin Global on June 10, 2021.

As the world’s biggest carbon emitter, China has a crucial role to play if policymakers are to put the global economy on a path to net-zero emissions and avert the worst consequences of climate change. Fortunately, Chinese consumers seem to be well aware of the challenge and prepared to take action, according to a survey by the Oliver Wyman Forum.

Eighty-nine percent of Chinese respondents say they consider it important or very important for companies to make commitments to reducing carbon emissions and becoming net zero. Among participants in the seven-country survey, only Italians put greater emphasis on such commitments, with 94 percent saying it was important or very important. Seventy-four percent of Americans shared that view, the lowest among the seven nations.

This is a critical year for efforts to reduce the threat of climate change. The United Nations has declared that worldwide emissions must fall by half by 2030 and reach net zero by 2050 to meet the UN Paris Agreement goal of limiting global warming to 1.5 degrees Celsius. The UK government wants countries to commit to becoming net zero by 2050 when it hosts the UN’s COP 26 climate change summit in Glasgow in November.

The world can’t get there without China. Decades of rapid industrialization have made the country the biggest producer of carbon dioxide emissions, totaling just over 10 gigatons in 2018, or 28 percent of the world’s total. That’s almost double the level of the United States, the second-largest emitter, although on a per-capita basis China emits only half as much carbon as the US.

In March, the National People’s Congress approved the country’s 14th five-year plan that, for the first time, committed the government to achieving President Xi Jinping’s goal of having CO2 emissions peak before 2030 and achieve carbon neutrality before 2060. Over 100 countries representing some two-thirds of global carbon emissions have committed to achieving carbon neutrality by 2050, with President Joe Biden bringing the United States into that club in April.

Urgent action is needed, though, to turn those commitments into reality. In its latest report, the International Energy Agency says the world needs to stop investing in any new fossil fuel projects and dramatically expand renewable energy sources if it hopes to achieve the “narrow but still achievable” goal of net-zero emissions by 2050.

Chinese consumers appear willing to play their part. Asked which of 14 potential lifestyle changes they planned to make in 2021 to reduce their carbon footprint, 10 percent of respondents say they would purchase an electric vehicle, two to three times as many as respondents from the other countries.

China rivals Europe as the world’s largest market for EVs, accounting for 41 percent of global sales last year. The government has made EVs a strategic priority and local regulations, including the availability of license plates and parking, favor electric vehicles in many areas. As early as 2009, the authorities chose 25 Chinese cities as pilots for transition to EV usage. By 2020 many of these cities, including Shenzhen, had fully converted their public bus and taxi fleets to EVs.

The EV market is just one example of how Chinese policymakers can quickly turn their plans into reality in the real economy. Consumers know that well, having lived through the largest and most-rapid industrialization in human history over the past four decades.

It’s that experience of transformational change that may explain the relative optimism of Chinese consumers in our survey. Asked what motivates companies to make carbon-cutting commitments, they cite leaders and staff who care and commercial revenue opportunities alongside shareholder pressure as the biggest factors. Respondents in most Western countries place a bigger emphasis on regulatory requirements.

Similarly, Chinese consumers say setting near-term emissions targets and tracking performance against those targets are the best measures for holding companies accountable to their climate pledges. Respondents in the six Western countries seem to believe more in sticks than carrots, citing fines for missing targets as lever most required to hold firms to account.

Perhaps more striking, 89 percent of Chinese respondents said corporate emissions commitments influence their willingness to buy goods or services from those companies. That was higher than runner-up Italy, at 77 percent, and well above Germany, which lagged the group at just 50 percent.